The plague and its cures

What was the plague? 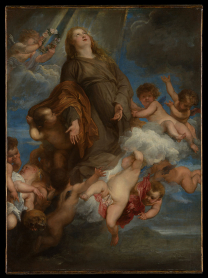 The first case of the Black Death (which became more generally known as the plague in its second and third outbreaks) in Europe is thought to be in October of 1347. When 12 ships arrived at a Sicilian port people gathered at the docks to welcome the sailors, but they got a nasty shock when they found that most of the men aboard were dead and the few still alive were covered in black boils. This began the fast spreading, and very deadly, first outbreak of the plague which lasted until 1353.

The Black Death spread from person to person through flea bites, in the air through droplets and through bodily fluids. Incorrectly, people at the time believed that bad smells, the alignment of the planets or God caused the illness. Bacteria wasn’t discovered until 1676 and it wasn't until many years later that it was connected to causing disease.

Those who caught the Black Death could expect to experience a fever, headaches and to grow buboes which were large swellings on the neck, armpit or groin. It is estimated that between 1347 and 1351, around 25 million people died of the Black Death.

How did medieval society treat the plague? 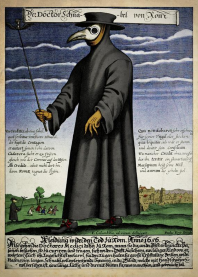 While today we look to the complicated science of mRNA for a cure for Coronavirus, those afflicted with the Black Death between 1346 and 1840 could rely on much simpler approaches to treating the disease.

The most common approach to treatment was through prayer. As we can see in the painting of Saint Rosalie, it was thought that if a Plague victim believed and prayed hard enough then a Saint would intervene to save them. However we know  that this was not generally very successful as the death toll was so high.

Medical treatments were very limited as medieval medical knowledge was based on an outdated and incorrect Greek theory of the four humours. It included practices such as bloodletting (which was as painful as it sounds), bathing in vinegar and chopping up a pigeon to rub over the ill person's body. It is easy to guess that these methods did not heal many people.

In fact, medical treatment for the plague was so ineffective that the term 'quack doctor' was born. A quack doctor isn’t a little yellow duck with a mask and a stethoscope, but that image isn’t too far off the real meaning. Today we use the term 'quack doctor' to mean a medical practitioner with no training or knowledge, suggesting that plague doctors really didn’t know what they were doing.