Imagine how difficult it must have been during winter in times gone by, especially when it was time for bed. That awful period of transition as you removed yourself from the warmth of the fireside, made your way to bed, removed your outer layers and crawled into the coldness of the sheets. Then lying there with cold toes and being able to see your breath in the candlelight.

One way of avoiding this tortuous experience is to own and use a warming pan. Filled with the glowing embers of a fire, the metal warming pan would be heated. Then held by the long handle, the pan would be swept between the sheets to remove the icy edge and provide a comfortable and warm welcome. Such a task might take as long as half an hour to ensure the sheets were both dry and warm.

Warming pans come in a variety of designs and materials. Often with brass or copper pans, and iron or wooden handles. There are 3 warming pans in the collection at Selly Manor Museum. On the face of it they are near identical but on closer inspection they each have their own design. Dating from the 17th century, they are of a more expensive variety with brass pans that have perforated holes to allow the heat to escape. They also have engraved designs on the pan lids and would make attractive decorations when not in use as they were hung beside the fireplace.

Sadly each design is now much faded but with close examination they reveal fascinating motifs. The first, dated 1620, has a central religious pattern with a flag and lamb. The lamb represents a sacrificial lamb which symbolises Christ's death for humanity, whilst the flag is symbolic of Christ's victory over death in his Resurrection. This warming pan also includes the inscription GLORY BE TO GOD ON HIGH  around the edges of the pan lid. The second warming pan also has a Christian motto, stating ALL GLORY UNTO GOD ONLY BEE, around a lion grasping a sword in the centre of the lid, alongside the date 1631. 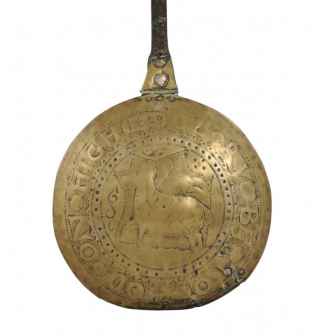 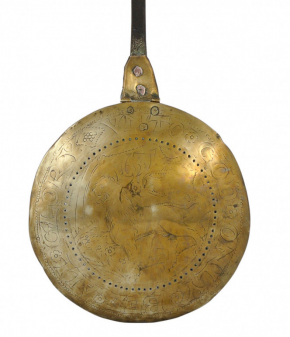 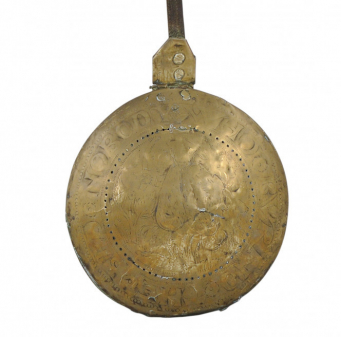 The final warming pan, made in about 1600, is perhaps the most interesting. In the centre is the figure of a body-less man, who has a head, arms and legs but no torso. Around the outside of the lid are the words WHO BURND THE BED NOBODY. The decoration portrays the character 'Nobody' who was a figure of blame in the 17th century. So if the bed were to get burnt, as the warming pan suggests, it would be the fault of 'Nobody', who in the best tradition of all puns actually had no body!

Whilst the design on the warming pan is now hard to see, without carefully looking under angled light, we can see from other objects made around the time how we would once have looked. The image below left shows the frontispiece of a play published in 1606 with an illustration of the comic character No-body. The late 17th century delftware figure below right is held in the Victoria and Albert Museum collection and also shows Nobody, demonstrating he was popular figure of fun at the time. 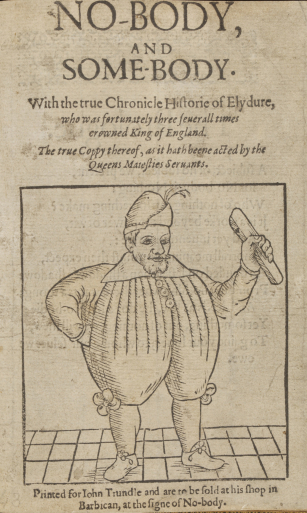 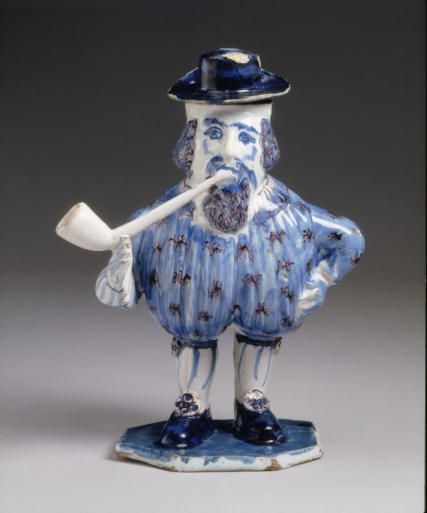