In this blog series, we are going to explore the myths about some of the most famous Tudors. 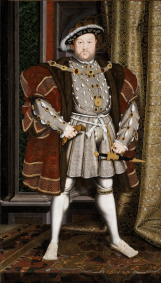 Henry VIII is the most famous of all English kings and most people feel like they really know this six time husband, but there are many things you may be surprised about...

Myth 1: He had syphilis

It is commonly asserted that Henry VIII had syphilis and that is why his wives had trouble giving birth to live children. However there is not really any evidence that this is the case. We actually have quite a bit of information about the health of Henry VIII throughout his reign. It was the kind of thing that was written in state documents and letters from visitors to court. In these documents there is no record of Henry exhibiting any signs of syphilis (which was well recognized at the time) or being given the treatment for the disease (a 6 week course of mercury). The ulcers on his legs are often cited as evidence for syphilis but it is likely that this was caused by deep vein thrombosis instead and some of his symptoms support this. Additionally none of Henry VIII’s wives or mistresses showed signs of being exposed to syphilis; Catherine of Aragon is often used as an example because of her difficulty in carrying a child to term, but that doesn’t actually fit with the medical profile of pregnancies affected by syphilis. None of Henry VIII’s surviving children showed any signs of congenitial syphilis either. It was probably a rumour started to discredit Henry VIII.

Myth 2: He was fat and unattractive

Yes – there is no denying it, by the end of his life Henry VIII was pretty large. When he died his waist was 54 inches and he was about 400 pounds! However, for most of his life Henry VIII had not been fat. As a young man he was very athletic and handsome. A Venetian diplomat wrote this description of Henry VIII in 1515, ‘His Majesty is the handsomest potentate I ever set eyes on; above the usual height, with an extremely fine calf to his leg, his complexion very fair and bright, auburn hair combed straight and short, in the French fashion, and a round face so very beautiful that it would become a pretty woman, his throat being rather long and thick.’ As a young king Henry was certainly considered attractive. For a large proportion of his reign he spent a lot of time each day exercising, either hunting or jousting. It was only after a serious jousting accident in 1537 where Henry's horse landed on top of him and he was unconscious for 2 hours that he stopped being able to move freely and started gaining a lot of weight.

Myth 3: He never cared for Katherine of Aragon

Considering Henry VIII disregarded Katherine of Aragon when she failed to give him a son, many people assume that he never cared for her, but this is just not true. Henry chose to marry Katherine of Aragon after his brother’s death and he cared, if not loved her, when they were young. For many years they were happy together and devoted to each other. Henry VIII trusted Katherine and they would ride and hunt together. In 1513 he even left her in charge of the country while he fought in France! Although things didn’t end well between Katherine and Henry she continued loving him until her last days. It is unclear how he felt towards Katherine towards the end of her life (and this was probably complicated) but we do know that once upon a time he loved her.