Objects of the Month

During the eighteenth and nineteenth centuries poaching became a huge problem for landowners. Desperate to protect their game and to prevent trespassers profiting from their illegal gains, methods were sought to discourage poachers. These methods could be brutal but were justified and supported by the law so long as the landowner provided adequate notice, usually a sign stating their presence.

The mantrap at Selly Manor (see the image later in the blog) is a grim piece of equipment which measures over six feet long. The central portion is made up of two large jaws, each with seven spiked teeth. Once the concealed trap was set, the intruder could trigger the mechanism by stepping on a footplate. The jaws would snap shut trapping, and no doubt badly injuring, the unfortunate victim. This type of trap was outlawed in 1827 to be replaced by a 'humane' version lacking the teeth.

Above left: An account of mantrap use from the Taunton Courier and Western Advertiser – Wednesday 28 August 1839. Note this is some 12 years after such traps were banned.
Above right: A warning sign on display at the Pitt Rivers Museum in Oxford, as required by law if landowners wished to use such devices. 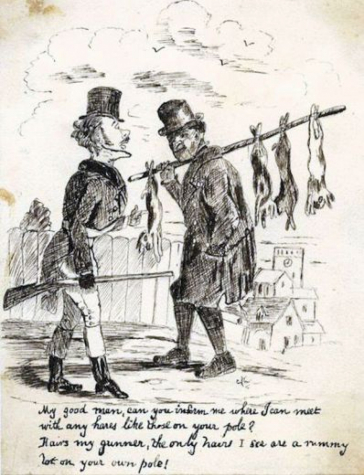 Above left: A nineteenth century illustration of a 'humane' mantrap, lacking the sharp teeth found on earlier examples.
Above right: A pen and ink cartoon depicting a gentleman hunter and a poacher carrying a pole of rabbits. The text reads: 'My good man, can you inform me where I can meet any hares like those on your pole? Hares my gunner, the only hares I see are a rummy lot on your own pole!'

Selly Manor Museum is also home to a collection of Spring Guns, which were another method employed to keep out poachers and could cover greater area. Trip wires were set up in the area which needed protecting, and were linked to the gun by a small metal ring. Typically between one and three trip wires could be set. If a wire was triggered the spring gun would swing to face the victim by means of an iron road which in this case pivoted in a wooden block. The pull on the wire would activate the trigger and then fire a shot. This spring gun has a double barrel and flintlock mechanism for firing. It could be stuffed full of small scrap metal, stones or even glass are fired just a foot or two from the ground causing great harm to the recipient.

The Keeper of Firearms and Artillery at the Royal Armories, Jonathan Ferguson, has referred to such contraptions as 'cemetery guns'. A serious issue arose in the nineteenth century of body snatching, where grave robbers would dig up remains in cemeteries to sell on the parts, often to medical schools for research purposes. The guns were a serious deterrent and effective in trying to control the problem in cemeteries. Ferguson goes on to quote a particularly unfortunate incident which helped lead to the banning on the guns in the 1820s,

“A youth, named William Lloyd, employed in the factory of Messrs. German and Co. and whose labour was the chief support of a widowed mother, went into Car Wood during the dinner-hour, and coming in contact with the hidden snare of a spring-gun, was dreadfully wounded about the legs. Some of the shots with which the gun was charged have been extracted, but others remain in the flesh and about the bone, which it is impossible to draw out ; and should the wounds finally heal up, it is greatly feared that the youth will be a cripple for life. If neither humanity, nor a sense of what is due to the outraged feelings of the public, are to have any effect in procuring the abolition of these murderous instruments, perhaps the fear of legal consequences may, in the end, lead to their disuse. If death were to ensue in any of these cases, we know not by what process of legal subtilty any juryman could reconcile it to his conscience to bring in a verdict of justifiable homicide. We take it, that if any person were to shoot another by hand, merely because he happened to tread upon a certain spot in a field or wood, no law of trespass would save him from the punishment due to murder or manslaughter ; and he must be a clever casuist indeed, who could point out the moral difference between this mode of destroying a fellow creature and that of so placing a deadly instrument as to produce the same effect with equal certainty.” reprinted in The Examiner, Issue 934, Part 87, 1826, p.29. 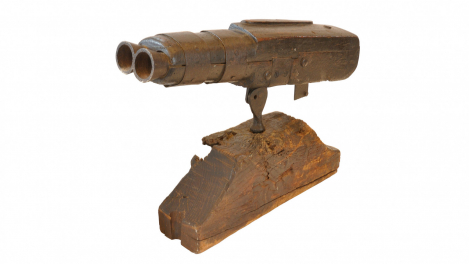 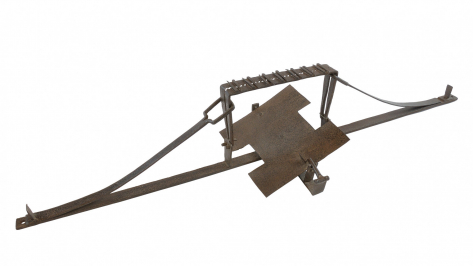 Above: Two objects in the Selly Manor Museum collection. The Spring Gun (left) and wrought iron Mantrap (right) both date from the early nineteenth century.

The find out more about objects at Selly Manor Museum we have published a full colour catalogue of objects in a book on the Laurence Cadbury Collection by Museum Manager Daniel Callicott, which is available from the museum by using the contact form below.