At a time when there were no electric lights or devices to distract people from the evening darkness outside, and nothing but candlelight to guide the way, there was one object in the home that shone out from the rest. Lit by the roaring fire, the eye would immediately be drawn to the metal slab which stood at the back of the fire - the fireback.

A fireback is a piece of cast iron, often decorated, which sat behind the fire and beneath the chimney. Its function was to reflect heat out into the room, which might otherwise be lost up the chimney, and to protect the fireplace itself from the intense temperature of the fire.

To make a fireback, an open mould was created with sand and clay. The mould may have been a simple shape, such as a rectangle, and decoration could be added by pressing shapes into the mould, such as rope to create a border or numbers to show the date of manufacture. Complex fireback patterns were carved into a single piece of wood and then used to form the mould.

This fireback sits in the bedchamber of Selly Manor. The design shows Jupiter, the Roman king of gods, lightning bolt in hand, riding his chariot which is pulled by two eagles as they travel across the heavens. The design was inspired by print from a series titled The Seven Planets. The prints were published by Johann Sadeler (after Maerten de Vos) in 1585, and then used as the design for firebacks over a century later. Whilst there is some artistic license in the fireback pattern, it remains largely in keeping with the original.

Unfortunately the fireback is heavily damaged. Years of use has caused corrosion and a significant break runs from the base to the right hand side. This sort of damage is common in firebacks of the early eighteenth century, which were made thinner than earlier examples. Originally this fireback would have been much taller with decoration around the now corroded base. This damage has also led to the loss of the pattern maker’s initials. The letters SHR have been found on a series of firebacks that were made in the early eighteenth century based on a set of prints illustrating the planets. This example is similar in design and probably by the same pattern maker. 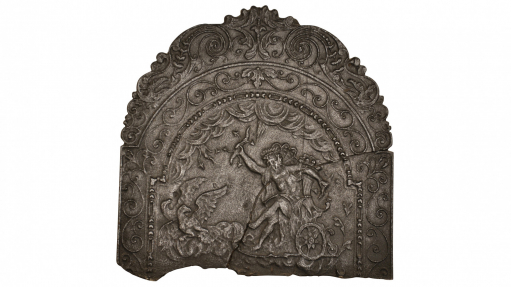 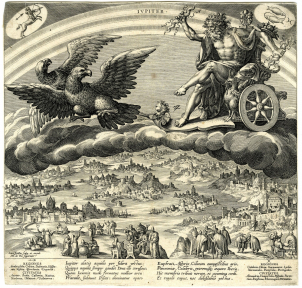