As you descend from the garret you will come back down into the bedroom; cross this room and access the solar through the little door just past the Grotesque Chest. Being careful not to bump your head, stoop through the doorway and emerge into the last room in Selly Manor: the solar. The name of this room comes from the French word ‘seul’ which means alone. This room was intended to be a private living space for the family that lived here. The rest of the house would have been busy with servants, farm labourers and tradesmen, and this room offered the family somewhere quiet to retreat away from the hustle and bustle. Here they could have played games, sung, played musical instruments, and spent quiet time with their family. 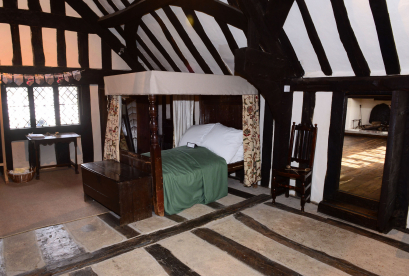 Dice games were a popular pastime and often money was gambled and lost. If you shake and roll a good dice score, the all is well. If it is ‘no great shakes’ then your score is not good. Today this saying still refers to something that is not very impressive.

This room is quite different from the bedroom we just passed through. Most noticeably, the small door; the doorway is so small because originally you would have entered the solar through the external staircase, so this door was a later edition to the house. The new door could not be made any taller as it would cut into important beams and could destabilise the house. This second bedroom is larger and colder than the previous room and the new reinforced concrete floor gives it a less homey feel (although this would originally have been made out of lime ash). The solar was also originally two rooms connected by a door in the middle. The divide can still be seen – it is marked by the section of wood sticking out of the wall near the fireplace, and its partner on the other side of the room.

The solar also has some quite special markings that the bed chamber does not. The timber frames of timber framed houses were often constructed in carpenters’ yards. Timbers were numbered and then taken apart, so that the building could be easily put back together on its intended site. When Selly Manor was moved to Maple road at the start of 20th century, the carpenters worked in exactly the same way. So in this room, the original scratchy medieval carpenters’ marks can be seen in the floor next to the more defined recent ones! 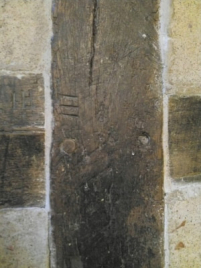 Old purses were leather pouches that closed with a string. If you held the string you controlled what money went in and out of the purse. Even today when you say someone holds the purse strings it means they are in charge of the money.

Although visitors are usually drawn straight to our costume collection in this room, there are some wonderful pieces of furniture that are worth looking at: 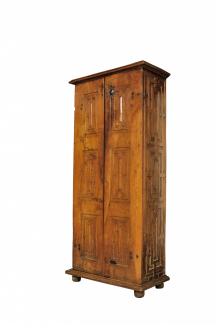 Dating to the 18th century, this wardrobe is Spanish and made of walnut. The doors and sides display carved rectangular decorations known as strapwork. This wardrobe belonged to Laurence Cadbury and is said to have stood in his office at the Bournville Village Trust Estate Office on Oak Tree Lane, where he was Chairman from 1954-1978. This piece of furniture was originally a cupboard and slots within the interior show where shelves once were. Laurence had these removed and hooks fitted so he could hang his hat and coat up every morning.

Bought by Laurence Cadbury from a dealer in Carlisle, this armchair was probably made in Westmorland. It has a heavy oak frame and the back is quite plain. Its original seat has been replaced with upholstery that shows a design of leaves and acorns with circular borders. A past owner has added an inventory mark to the back panel, these branded letters show the initials 'IC' and are a mark of ownership made either during an inventory of possessions or in case of theft. 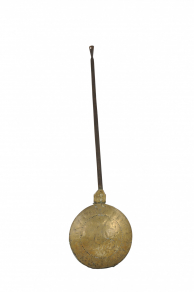 The warming pan, once filled with hot coals or ashes, was moved between the sheets to warm the bed. This example was made in about 1660. In the centre it is possible to make out the faded figure of a body-less man. Around the outside of the lid are the words ‘WHO BURND THE BED NOBODY’. The decoration portrays the character of ‘Nobody’ who was a figure of blame in the 17th century. So if the bed were to get burnt, as the warming pan suggests, it would be the fault of ‘Nobody’, who in the best traditions of all puns actually had no body.

Let the Cat out of the Bag

We hope you have enjoyed virtually exploring the solar and we hope it will not be too long until we can welcome you back to Selly Manor in person. If you missed any of the rooms on the Selly Manor virtual tour you can go back and see them here: The Virtual Museum.