From the bed chamber, continue up the small, spiralling staircase up into the garret. As you emerge into this space you may notice the floor again feels uneven, that you can peek out of the high windows to see the rooftops of Bournville and that, unexpectedly, there are many helmets and weapons lining the room. You have climbed up to the highest room in the house; the garret, or the attic, which is on the third floor above the hall and bed chamber. In 17th century when this part of the house was built, the garret was probably used for storing food such as apples, onions and grain over the winter, as the room would be cool and dry. It is the only room in the house without a fireplace so instead of having a hotspot by the fire, the temperature throughout the whole room would be relatively constant. It is likely that this room is also where any female servants would have slept – away from the male servants who would sleep downstairs as guards! 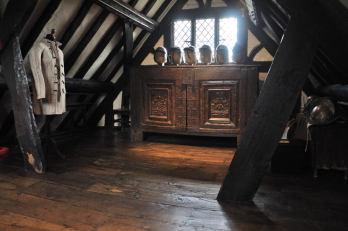 Out of all the rooms in Selly Manor, this one looks the least like its original self, with a somewhat random collection of objects now on display. Not only are there weapons and armour which the original inhabitants, as farmers, would not have owned, there is an unusual and special feature to this room. Opposite the stairs, at floor level, a small piece of the wall swings open as a door, revealing a small hiding space. Inside, there is a bible and a crucifix. This is a priest hole. Although the priest hole is a very interesting starting point for talking about religion in Tudor England, there is no evidence that this priest hole is authentic to Selly Manor – it was probably added when Selly Manor was moved to Maple road. The religion of the Setterford / Pritchett family who lived in Selly Manor when priest holes were in use is not known. However, several members of the family are buried in St Lawrence’s Church, which is Church of England, so they would have no need for a priest hole. To learn more, read our blog on Priest holes. 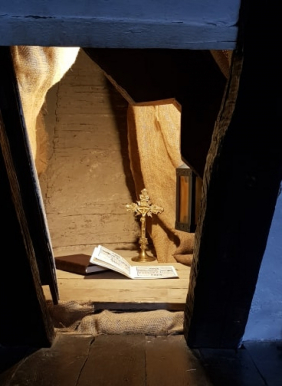 The original freelancers were mercenary soldiers. They fought with a lance and would fight for anyone that would pay for them. Today it can be anyone who works for different people or companies.

When Selly Manor was moved to Maple road and refurnished it acquired numerous helmets and weapons. Here are some of the interesting pieces in the garret: 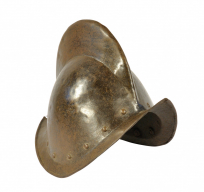 The morion helmet is particularly distinctive with a large comb which sits centrally on the domed pot, adding strength. The brim is angled downwards and forms a point at the front and back of the helmet. This type of helmet is often associated with Spain, but was used by a number of European soldiers. 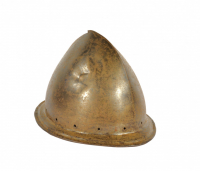 The cabasset helmet’s name comes from capaceta, the Spanish word for cap. It has a taller dome than the morion helmet and usually terminates with a small stalk. The brim is narrow, flat and oval in shape. 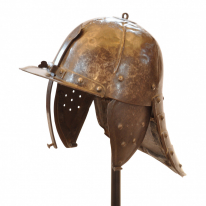 The zischagge helmet is more complex, with a large peak, nasal bar and ear flaps. At the back of the helmet is a steeped guard sometimes referred to as a ‘lobster tail’ and consists of four broad and curved plates fixed to one another. This type of helmet originated in eastern Europe but this example is thought to be Dutch. 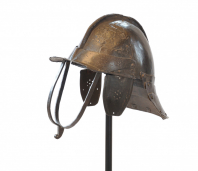 A similar helmet is the English pot helmet. The main difference is the face guard, which in this example is constructed with three bars that form a type of visor with a pivoting peak. Made for use in England during the mid-17th century, large quantities like this were made by the Dutch and imported during the English Civil War.

Nowadays this means a vigorous argument, often planned, as you know when you are going to fall out with someone. A pitched battle was actually a battle that took place on a planned and prepared site. As opposed to a skirmish where soldiers came across each other accidentally. 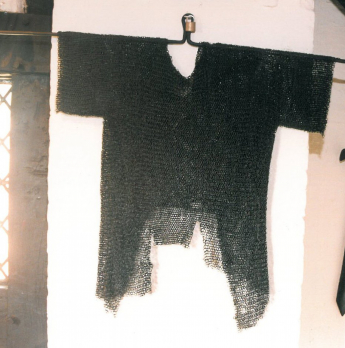 This mail shirt, or chainmail, was made in the 19th century. It is made of wrought iron and constructed using riveted rings which allowed the flexibility required for movement when worn. Mail was used effectively to withstand edged weapons in battle. Mail is thought to have been invented by the Celts and the oldest surviving example of mail is from 3rd century BC.

Two strings to your bow

Archers out hunting would carry a spare string for their bow in case the first broke, so they were always prepared. Today having another string to your bow means you have another way to do something, or another skill that is useful. 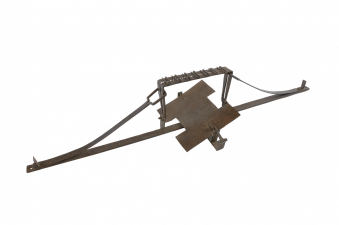 The mantrap at Selly Manor is a grim piece of equipment, used to stop poaching. Measuring over one metre long, the central portion is made up of two large jaws, each with seven spiked teeth. Once the concealed trap was set, the intruder could trigger the mechanism by stepping on the footplate. The jaws would snap shut trapping and badly injuring the victim.

We hope you have enjoyed virtually exploring the garret and we hope it will not be too long until we can welcome you back to Selly Manor in person. Join us for the next instalment where we will explore the solar.