To get to the second floor of Selly Manor you need to head back into the hall and follow the staircase past the fireplace. Pause on the landing to gaze through the spying window which looks down into the kitchen. This handy window would let the lord and lady of the house check on their servants and make sure they were working. Continue up the next few steps into the bed chamber. This room feels rather like a corridor now, with the second bedroom coming off it and stairs to the attic, but when it was built the small door to the second bedroom did not exist. Instead, the second bedroom was accessed from an external staircase. 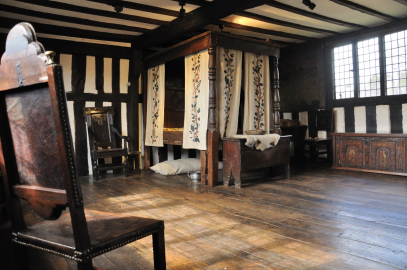 This light, airy room shows you what Tudor sleeping quarters would have looked like; with a large bed, a smaller truckle bed, and lots of storage. Although it must be noted that Tudors rarely had rooms that were just used for sleeping, during the day this room would be used for many different purposes. The large windows in the bed chamber let in a lot of light but would have been an expensive luxury, showing that this room was built to be lovely as well as practical. The impressive bed draws your eye as you stand in what would be the doorway to the room, but is really just the top of the stairs. As you cross the room to look at the large cupboard next to the fireplace you may think that it looks very slanted and may momentarily feel unsteady – it’s not actually the cupboard which is slanted but just the floor. But don’t worry this old house is perfectly safe! 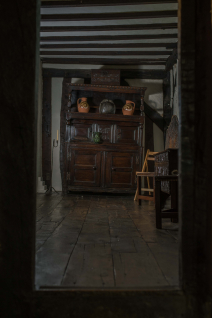 You might think that sleep is something that can’t have changed much over the centuries, but the Tudors had different rituals and habits when it came to sleep.  The Tudors knew which kind of practices at bedtime were helpful for getting to sleep; before bed they would pray, read by candlelight and women would have done embroidery. As Tudors had no artificial light apart from candles their sleep was governed by natural rhythms of daylight and darkness. However they did have a strange habit of splitting their sleep into two sections, with ‘first sleep’ and ‘second sleep’ being broken up by an hour or so of being awake. In between these sleep periods they would read, write, chat, or even sometimes visit neighbours! Another strange habit they had was sleeping upright, as they believed the devil might mistake them for being dead if they lay down. It was also common to have many people in one bed – it wasn’t restricted to one or two!

The mattresses on Tudor beds were held up by rope. The strain of having many people on them made the rope sag each night. So, they said ’sleep tight’ to remind you to tighten the rope. And of course you were warned about the bugs that might bite you!

Here are some special objects from this room: 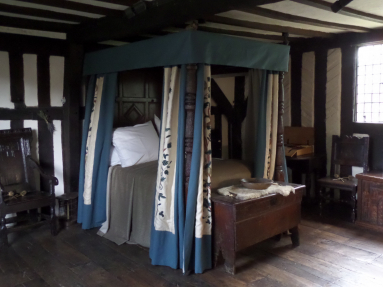 This bed has a wooden tester, or roof, from which the bed hangings are suspended. Both the tester and the bed hangings were intended to keep out cold draughts, and to provide a degree of privacy. The cream panels contained within the curtains are believed to date from the 17th century. The oak frame has a number of holes pierced into it. Ropes would be threaded through the holes and criss-crossed through the frame to support the mattress. Typically a bed like this had three mattresses. Within the panelled headboard is an applied moulded diamond. In the corner of this panel are the initials 'EP', and the date 1592. The bed is believed to have belonged to Edmund Prys who was a clergyman and a respected poet. He is remembered for helping to translate the Bible into Welsh and for his Psalms which appeared in the 1621 Book of Common Prayer.

This is said when someone has died. Some of the old beds have candle-holders carved into their timber frame. As the family kept vigil around the dying loved one the candles were kept alight. Once the person had died the candles were snuffed out. 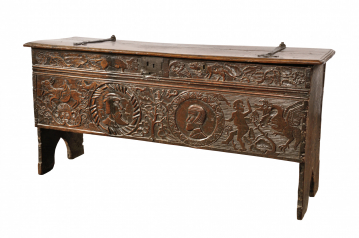 This grotesque chest, probably dating from the late 16th century, depicts the profile carvings of a lady and a man, known as romaynes, as they are reminiscent of Roman coins. They look like they are of yeoman class and are probably husband and wife. The chest may have been made to celebrate a special occasion such as their marriage. The rest of the carvings portray a chaotic scene of fabulous monsters and naked figures, the type often described as grotesque. This includes a carved face spewing vines from his mouth, in the lower left corner of the chest, which is a green man, thought to represent nature or fertility. 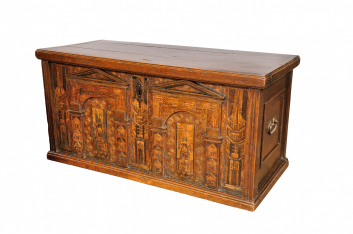 Dating from between 1530 and 1630, this type of chest is often referred to as a Nonsuch Chest. The chest is veneered with thin slices of wood stuck to the surface. By using different types of wood, in this case oak and holly, as well as different shapes and colours, a marquetry design is made. Nonsuch Chests get their name from Henry VIII’s palace of Nonsuch. Despite the association with the palace, the chest was probably not made to directly depict it. Chests like these were made in large numbers in the 16th century and imported from Germany.

We hope you have enjoyed virtually exploring the bed chamber and we hope it will not be too long until we can welcome you back to Selly Manor in person. Join us for the next instalment where we will explore the garret.