The parlour is the first room you come into if you enter Selly Manor through the main door. As you enter Selly Manor you are probably struck by one thing – how dark it is. Even on a bright sunny summer’s day, the inside of Selly Manor remains relatively dark. This is partly from the way the house was made, and the small windows, but also to do with the low lighting required to protect our collection. The next thing you probably notice is the chill in the air. Selly Manor, like most historic houses, is kept at a constant low temperature to protect the collection, but this also makes it an authentic Tudor experience. Tudor houses would have been dark and cold – with warmth and light only coming from the fire. Lastly, you will mostly likely be struck by how much wood there is inside the house. Not only does Selly Manor have the traditional ‘black and white’ timbered look, but every piece of furniture is also made out of wood. Most of the furniture in Tudor England was made out of oak because it was readily available throughout the country and was affordable. 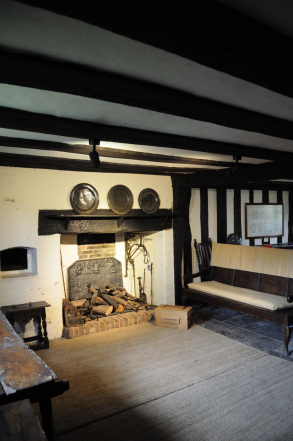 Current photo of the parlour

Not worth a rush

Floors were made of beaten earth in the Tudor times, not the stone you would be walking on now. Rushes were scattered inside to act as a floor covering. Sometimes they were left for quite a while and could be very unpleasant and smelly. If you had important guests to stay you would put fresh rushes down, but others were not ‘worth a rush’. 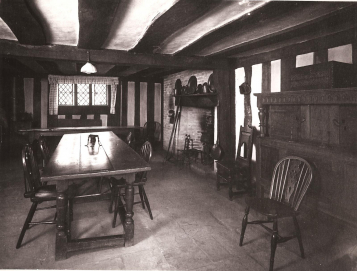 The name parlour comes from the French word ‘parler’ – to speak. The parlour is the early modern equivalent of a living room – a space for the family to relax and spend time together. They would talk to each other in the parlour, sing and play games. Some tradespeople used the parlour for business dealings as well. In richer Tudor houses, the parlour was used for receptions around formal family occasions such as weddings, births and funerals.

As you venture further into this room, there are a few things that have probably caught your eye: 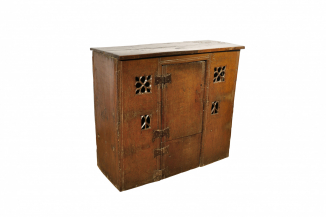 This small oak food cupboard is frequently referred to as a dole cupboard and dates from 1500-1550. The holes in this cupboard, which appear as part of the decoration, are actually to allow air to circulate around the food that would be kept inside. This cupboard has evidence of old nails on the inside of the holes, which would support a haircloth which allowed air in but keep insects and rodents out. Dole cupboards were found in churches or kept in great houses. Leftover food from banquets were placed in these cupboards and then ‘doled out’ to the poor.

On the bread line

Today, this phrase means the level of income people have when they are extremely poor.

The phrase dates back to medieval times when rich people would take their leftover bread to church, and after the services poor people would form a line to wait for the bread to be given to them. 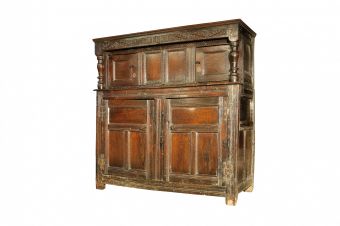 A press cupboard was a common and important piece of furniture in a 17th century house. It was used to store possessions, like a wardrobe.

The most significant decoration on this press cupboard is the carved rail. Flanked by S scrolls, the centre of the carving features the inscription ‘TLb1673’. Whilst ‘TL’ is almost certainly the initials of the original owner, we can only speculate that ‘b’ might refer to the owner having been born in the stated year. 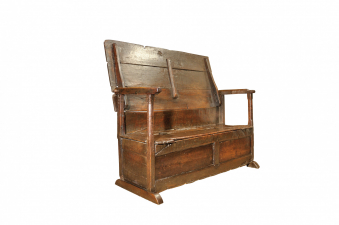 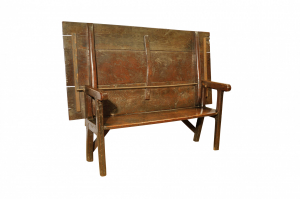 These two table settles both date from the mid-18th century and have similar functions but are constructed in different ways. While neither settle is particularly fine, they highlight the flexible use of early modern furniture, the kind which would have been common in farmhouses. They were an affordable and practical solution for households with little money and space, as they could be used as a storage compartment (the first settle), seat and table. They were the ideal place to ‘settle down’, which is where the phrase likely comes from.

We hope you have enjoyed virtually exploring the parlour and we hope it will not be too long until we can welcome you back to Selly Manor in person. Join us for the next instalment where we will explore the hall.