Having examined Sutherland’s 1809 depiction of the manor in our previous post, it seems appropriate to take a leap forward in time and discover how artistic interpretations of the building changed. Subsequently, in this instalment, we will take a glimpse into the Selly Manor of the late eighteenth century through the eyes of another local artist.

Item two: ‘The Back of Selly Hill Grange’

The second item we have chosen to include in this series is John Alsop’s watercolour, ‘The Back of Selly Hill Grange’. Although we do not have an exact production date, we can surmise that Alsop produced this piece in the 1890s. It is a painting of particular interest due to the presence of Alsop’s personal notes on the reverse. He details architectural aspects of the building and notes that the painting is based on ‘original sketches made many years ago’. We can subsequently speculate that the painting depicts the manor one to two decades earlier than the assumed production date. 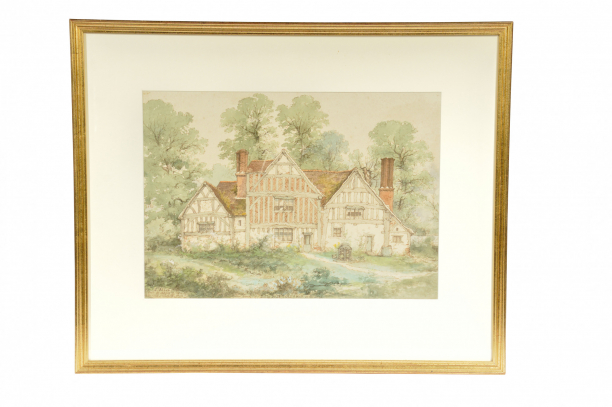 Like Sutherland’s piece, Alsop’s ‘The Back of Selly Hill Grange’ illustrates the manor in its original Selly Oak location. Assuming that Alsop’s ‘original sketches’ were made between 1860-1880, we can deduce that the manor depicted in the painting was fully functional and in use. By the 1860s, the house had been divided into three separate cottages and occupied by local families. The 1861 census reveals that living conditions would have been extremely uncomfortable and overcrowded, as twenty-one inhabitants were listed at the property. This level of overcrowding was typical in nineteenth century Birmingham, as the city experienced rapid expansion. Advances in industrial technology resulted in workers flocking to the city and causing huge increases in the population. As a consequence, Birmingham underwent a period of modernisation during Alsop’s life. Many aspects of the modern city, such as the sewage system, city-wide electricity and inner-city train stations, were constructed around the time that this painting depicts.

Despite city expansion, nineteenth century Selly Oak remained relatively rural. In his painting, Alsop depicts the manor in a lush surrounding of trees and greenery to reflect this. Unusually, his piece portrays the rear view of the manor as opposed to the more commonly depicted front. This gives us a unique insight into rarely illustrated domestic details of the building in its original surroundings, such as a small water well, garden paths and rear entrances.

Unlike many of the local artists whose work is housed in the Selly Manor collection, we are lucky enough to know a little about Alsop and his relationship to the building. Born in the centre of the city in 1828, Alsop remained in Birmingham his whole life. Having attended the King Edward VI School, he took up a career as an agent for a business known as Messrs. Betterly and Company of Valparaiso. Throughout his life, Alsop keenly pursued an interest in art. He enjoyed painting landscapes and was inspired by the honest and natural style of William Constable. This appreciation of nature is evident in Alsop’s depictions of the manor.

This painting is the second portrayal of the manor produced by Alsop. In both cases, Alsop’s notes on the reverse help us understand the condition of the building. In this particular painting, he writes that he artistically ‘restored timber in right and left gables’, suggesting that building was beginning to fall into disrepair by the 1860s. Although the manor was in full use, it is unlikely that maintenance was regular or comprehensive. Another interesting point in Alsop’s notes is his reference to the title of the building. Despite naming his painting ‘Selly Hill Grange’, he writes in his notes that the building is ‘at present known as the Rookery’. This ambiguity in the name of the building is a common feature in many of the paintings housed at Selly Manor. It appears likely that the title of the building changed throughout time according to its usage and location. 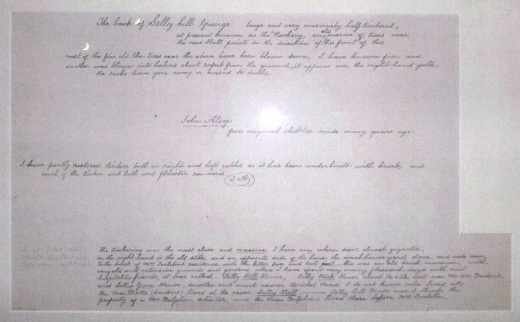 Pictured: Alsop's notes on the reverse of the painting

‘The Back of Selly Hill Grange’ contains numerous charming details and gives a great insight into the development of the manor through time. Its rich background allows us to understand the history of the building, as well as its place in the wider Birmingham context. It really is a great addition to this series that deserves to be admired.