What did the Tudors do to celebrate the festive season?

While we might get most of our modern Christmas traditions from the Victorians, you might be surprised to know that a Tudor Christmas wasn’t a million miles away from what we know today.

Here we can take you through just a few things that happened on and around a Tudor Christmas.

We all see turkey as our traditional Christmas meat today. But turkey didn’t actually arrive in England until the 1520s (1526 it is believed). King Henry VIII was actually one of the first to enjoy it as part of a festive meal.

Carols were super popular in the Tudor period. They were another way for people to spread the story of the birth of Christ. The very first published collection of carols on record is from 1521. Many 16th century carols are still around today, including: The Holly and The Ivy, We Wish You A Merry Christmas, Ding Dong Merrily on High and Good King Wenceslaus.

The Puritans banned Christmas festivities in the 17th Century, including the singing of carols. This meant that carols went unsung until the Victorian period.

This odd looking word was derived from the Anglo-Saxon “Waes-hael”, which meant “be whole” or “be of good health”. The ‘wassail’ was essentially a large bowl holding roughly a gallon of punch. This punch would be made from hot ale, sugar, spices and apples. The idea was the bowl would be passed around to be shared with friends and neighbours. There is a suggestion about a crust of bread being placed in the bottom of this bowl and being offered to the most important person present, which some have linked to the idea of giving toasts at important meals.

Gifts were traditionally given on January 1st in Tudor England.

For monarchs, gifts could hold a political significance. Whether a gift was accepted or not indicated whether you were in favour or out of it with the Monarch. For example, Henry VIII in 1532, rejected the gold cup which was sent to him by Katherine of Aragon. But he did accepted the set of boar spears sent to him by Anne Boleyn. Henry was attempting to divorce Katherine at this time, and he married Anne Boleyn just one year later.

Elizabeth I also accepted and rejected gifts based on who she was pleased and displeased with at the time. For example, in 1571, while he was imprisoned, the Duke of Norfolk sent Elizabeth a rather impressive jewel for her gift. She rejected his gift and executed him for his part in the uprising of the northern earls (he was executed on 2nd June 1572).

The Tudors did not have fancy Christmas trees full of decorations like we have today. Instead they would decorate their homes with greenery from outside. This included a lot of ivy, holly, mistletoe, yew and laurel.

Mistletoe was often hung around the home, somewhat similar to what some still do today. It had long been associated with fertility, and the kissing underneath it became a tradition because of these associations.

On the 24th December, a large log would be chosen and decorated. It became the yule log. Once decorated, it would be laid out in front of the hearth and set on fire. It would be kept aflame all through the 12 days of Christmas. Many people chose to keep the charred remains of the yule log for good luck in the New Year.

Mince Pies were originally quite different! They contained 13 ingredients, which were supposed to represent Christ and his 12 apostles. They had dried fruits, herbs, spices and some chopped mutton all inside.

The 12 days of Christmas was when the celebrations of Christmas truly began. They started on the 25th December and ran through until the 6th January. The 6th of January was known as Epiphany, or Twelfth Night. This was meant to be the day that the last people (the three wise men or kings) arrived at the stable to visit the baby Jesus. During this time there was no work allowed to be done, other than feeding/caring for animals. Workers would not tend the fields and women would not be allowed to use their spinning wheels. Flowers/foliage was often placed on top of spinning wheels to prevent their use. Work would be allowed to start up again on the first Monday after the 6th of January, which was known as Plough Monday.

It is worth noting that all of the traditions above would have been a ‘traditional’ part of Christmas for the wealthy, not everyone in Tudor England would have been able to afford to take part in such lavish celebrations. We know considerably less about what the poorer side of society did for Christmas, but we do know they would have stopped work to celebrate it with their friends and family, which is arguably the most important part of Christmas. 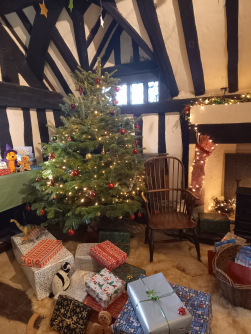 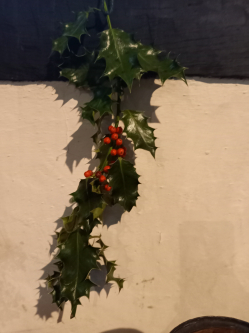 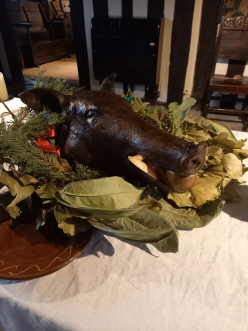