Are you a night owl or early bird? If you’re someone that’s always tired, maybe you would fit the Tudor approach to sleep better. 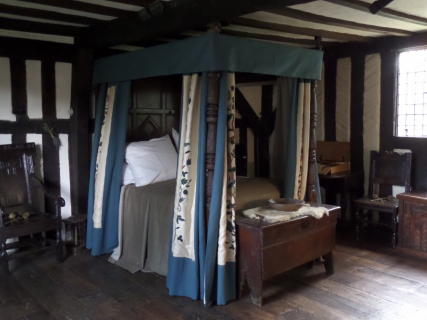 Generally, sleep was seen as medicinal, with its primary function being to aid digestion. While the food purified in your body it was recommended that you should sleep on the right side first, then turn over to the left side. That also meant not eating too close to going to sleep.

‘Seven hours is enough, and sleep on your right side with your head high, under a thick quilt and wearing a scarlet nightcap.’[1]

People were grouped into categories according to the four humours of the body. These humours were blood, phlegm, yellow bile and black bile- I’ll let you guess what the last two are! The four humours were central in medieval society, with all medicine attempting to keep the humours in balance, sleep included. Too much sleep or too little could cause one of the humours to become imbalanced, and it was believed that the person would become ill, so physicians recommended between seven and nine hours of sleep a day depending upon your particular body type.

The Tudors would also split their sleeping period into two, sleeping for approximately half of their allotted time and then waking for a few hours before returning to sleep to reach their seven to nine hours. During the awake period people would participate in general pastimes such as reading and needlework. This time was also said to be the best time to conceive.

Sleeping positions were also vastly different to what most people do today. Lying flat in bed was associated with death, so medieval people would sleep in a half upright position. Andrew Boorde even suggested that daytime naps should be taken standing up, and leaning against a wall.

In her research Dr Sasha Handley posits that the ‘bedroom’ is a relatively modern concept, and in Tudor times you could find beds in other areas of the house. As most beds would have had a curtain that could be drawn around the occupier to provide privacy, many medieval people would not have felt it necessary to retire to an entirely separate room to sleep. For many working class Tudors, a separate room may not have even been possible due to their home consisting of one primary room that would be used for cooking, eating and sleeping.

Pre-sleep rituals were also important, with many people drinking a tonic of herbs or hanging herbs such as lavender around their neck. Shoes would also be placed upside down to prevent spirits and other supernatural beings from walking off with them. [2]

For more information on Tudor sleep habits, follow these links: