Object of the month August 2021: The Joint Stools

Joint stools were a very common sight in a Tudor home. They were owned by all types of people, from a poorer farmer to a nobleman. They were a staple in any domestic environment of the time. In our collection we have four, all slightly different from each other. 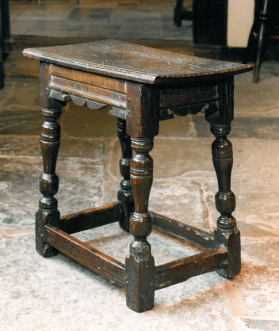 The decorations and finishes on each of our stools may be slightly different but the way they were built is all the same. They were designed to be sturdy yet lightweight and easily movable around the home. They don’t stand very tall, most joint stools are between 32-42 inches tall.

They’re pretty modest objects, but ones with a surprisingly magical link.

Joint stools have a long-standing association with the supernatural.

Joint stools were often kept near fireplaces, as this was the warmest place to sit. People would gather around the fire, sitting on these low stools, and tell stories. Most of the time these stories would include some supernatural element; the Tudors loved a good theatrical story as we know from Shakespeare.

These stools were also supposedly used by witches as tools in spells. It was a popular belief that witches could enchant certain domestic objects, most commonly the joint stool, to take their human form. So it could trick other people into thinking the said witch was at home when really she/he was out causing mischief and havoc.

Shakespeare makes use of the joint stools supernatural links in some of his plays. In King Lear the Fool apologises to Goneril: “Cry you mercy, I took you for a joint-stool” (Act 3 Scene 6). The suggestion historians have posed for this is that he could be calling her a witch! In MacBeth, the joint stool imagery is used again when Lady MacBeth, annoyed and exasperated at her husband for acting the way he is, says that he looks “but on a stool” (Act 3 Scene 4). But MacBeth is seeing the ghost of Banquo! Shakespeare has toyed slightly with the popular beliefs here to make it fit his story but the underlying concept of joint stools being linked in some form with the supernatural stands.

The joint stools we have here at Selly Manor are not supernatural in any way (unfortunately), but they still look very nice surrounding our dining table in the hall. 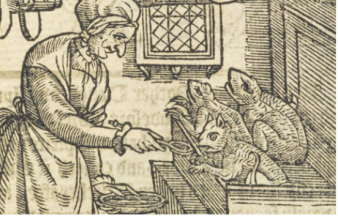 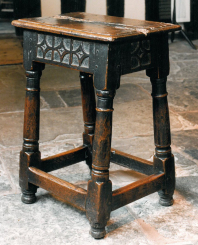