Object of the month

Object of the Month: July 2021: The Lion and Unicorn Armchair.

Our object of the month for July is our rather interesting armchair containing the carvings of a lion and a unicorn. If you have visited Selly Manor recently you may have seen this chair on display at the head of the dining table. 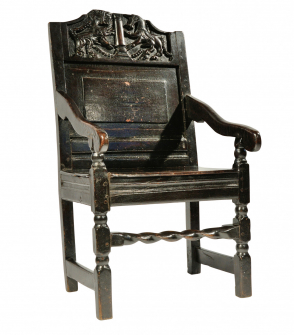 The chair itself is made of oak and has been painted with a black varnish. We know from his notes that this was done shortly after Laurence Cadbury bought the chair in 1910. He had it repaired and restored to the condition it can be viewed in today.

The most interesting part of this chair is the carvings on the backrest. The carving depicts a lion and a unicorn on either side of a pillar. You could describe them as supporting the pillar. A close up of the carvings is below: 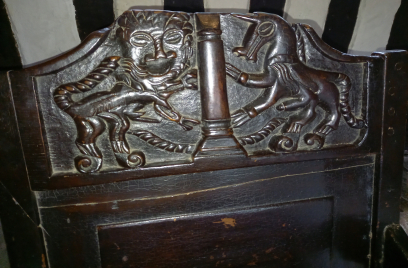 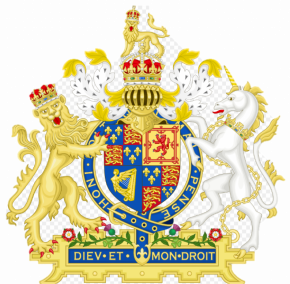 This is a very recognisable image to us today but it was created by King James I when he became King of England in 1603. James had previously been James VI of Scotland, and he was the first monarch to rule both England and Scotland after the death of Elizabeth I. In order to commemorate the joining of these countries together, he created this design for the coat of arms.

The Lion represents England, while the unicorn represents Scotland. They are either side of the shield, supporting it. These were the national animals for their respective countries. Before James changed it, the royal coat of arms used by Elizabeth I had shown a lion and a dragon. The dragon being the national symbol for Wales, it showed that she was the monarch of both England and Wales. James followed this idea by changing the dragon to a unicorn, symbolising the union of England and Scotland under his rule.

The lion and the unicorn are both symbolic in their own ways. The lion had been associated with England since Richard I, or as most know him, Richard the Lionheart (King of England from 1189 until his death in 1199). The lion represented strength, courage, ferocity and majesty.

Very few people in England at that time had ever seen a lion. In the 1200s a royal menagerie opened at the Tower of London which housed exotic animals, such as lions and a polar bear, which had been given to the monarchs as gifts. Records show that King Henry III (1216-72) was given three lions in 1235 by the Holy Roman Emperor, Frederick II. Edward I later renamed the tower where the menagerie stood to ‘the Lion Tower’, showing the status this exotic animal held in the eyes of English royalty.

The unicorn has been the national animal of Scotland since the mid-1500s. This is when it first appeared on the royal coat of arms for Scotland. There are plenty of mentions of unicorns in various mythologies. They are always described in such texts as large, fierce beasts. Their horns were said to have strong healing properties and be able to purify poisoned water. The white of a unicorn symbolised purity and chastity.

The unicorn on the Scottish coat of arms, (and on the English ones too after James I), is bound by a gold chain. The unicorn was believed to be one of the strongest animals; a wild and untameable beast that could only be calmed by a virgin maiden. The chain demonstrated the power of the Scottish kings- they were strong enough to tame a unicorn.

Many of you may have heard the song about the lion and the unicorn fighting for the crown. There is lots of folklore about the lion and the unicorn battling to become the ‘king of beasts’. Choosing these two most powerful creatures to be the guardians of the royal coat of arms certainly projected a powerful message, to the King’s subjects and beyond.