Object of the month

This is one of the plainer chests in our collection, so it may surprise you that it has become our object of the month. But it has a very special marking on it. On the front, just below the lock, is a symbol. This symbol, though very easy to miss, is a very important one for helping us date this object. It also tells us a bit about what this chest may have been used for. 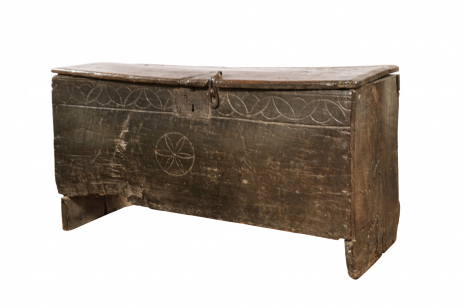 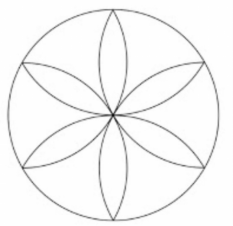 This symbol may look slightly familiar. It is found all over England in lots of historic properties. Usually it is found etched into wood or stone around doorways and entrances.

It is one of many symbols from the medieval and early modern period that falls into the category of apotropaic marks. Apotropaic comes from the Greek word “apotropaios” which means “averting evil”.

There are a few symbols which fall into this category. The other one which is really common is a capital V. or VV. Or these V’s inverted and crossing over one another to make an M. These were symbols for the Virgin Mary. The V was for virgin and VV meant Virgin of Virgins. The M was for Mary or Maria.

Below are some other common protection and apotropaic symbols. 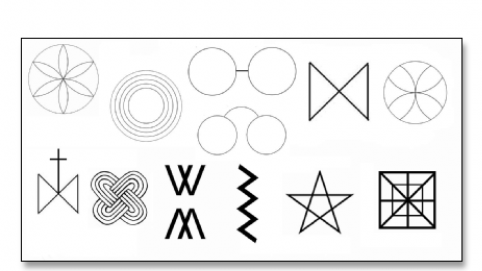 The symbols which stood for the Virgin Mary were supposed to scare evil spirits off because of how pure she was. Some of the other symbols were used because people believed the spirits could be drawn into the lines and trapped.

These markings had a few purposes. Like the Greek meaning suggests, they were primarily used to “avert evil”. They have become known by a few to be anti-witchcraft markings, designed to keep the evil witches out of their homes. They were also used to keep out malevolent or evil spirits which may have been in league with witches or the devil. Protecting their homes from evil was a big concern of medieval/early modern people. These marks gave them that added protection, to help keep their family safe. They also began to be associated with good luck, so people would carve them into their homes in the hope that those who lived there would then have good luck bestowed upon them.

It was because of the reason above that these types of markings are often seen around doorways, windows and sometimes fireplaces. Entrances where spirits may have a chance to gain access to the home. While these were the most common places to put these marks, they weren’t the only places. They could also be found on some items of furniture, especially where precious items were stored. These means they were mostly on chests, just like the one from our collection. It is more common today that these marks are found in the beams or stonework of buildings themselves, so to have a mark survive on a piece of furniture is quite special.

From this information we can infer a few things about our chest. We can say with some certainty that it must have been, at one time, used to store items which were considered of some worth to its owner. This gives a certain status to the object. It would have been an important piece of furniture to its owner. Which may be how it came to survive. Whatever its full story, we are very lucky to have it within our collection here at the museum.