Walking through from the parlour, the next room you will enter is the hall, or the dining room. It is a spacious room of which the central point is the large dining table. Looking past that you will see the cluttered fire place and to your left a large tapestry. This room feels much bigger and brighter than the parlour. This part of the house was built between 1608 and 1664 and replaced an earlier medieval hall that was attached to the section of the house which the parlour is in. The functions of a house changed with the transition from medieval into the early modern period. While in the medieval period the hall was often the main part of the house, where all of daily life would take place, by the beginning of the 17th century privacy was becoming more important and houses had a greater number of smaller rooms, with particular functions. The function of the hall was to be a space where the family took their meals. 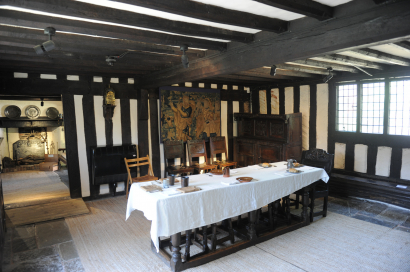 If they could afford it, Tudors would have three meals a day. For breakfast they would usually have bread, butter, sage leaves and some ale. The main meal, dinner, would be at midday, and a light supper would be taken at around 5pm. Mealtimes were important, not just for eating, but as a time when the whole family came together. In the Tudor period, this was largely so jobs could be given out, which happened at the start of the day, and the day’s events could be discussed at supper. It was common for all members of the family to help out with jobs, for example looking after children and animals, planting and harvesting crops, cleaning and mending clothing and preparing food.

Social hierarchy was very important in the Tudor times. Even within the family, social order was often reinforced and this is highlighted by dining habits. Where you sat at the table would depend on your position in the family. It was usually the father, as head of the house, who would sit at the head of the table. Other important guests and family members would sit near him. The highest ranking person sat on a chair, while everyone else sat on benches, stools or even the floor. 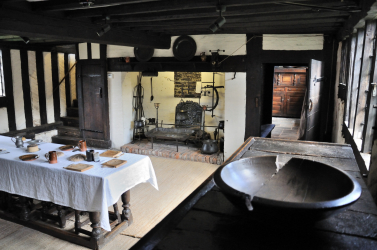 Chairman of the board

The man of the house was considered the most important and was given the best chair. The table was called a board because it was made from a wooden board on legs. So he was known as the ‘chairman of the board’. This saying has survived today in the business world.

This room is furnished with a combination of quite ordinary and more intricately decorated pieces of the collection: 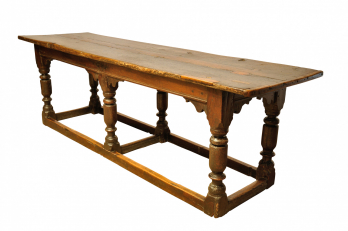 This large oak dining table dates from the 1640s. Tables like these would have had a vast array of functions, from food preparation and dining to writing documents, meetings and games. The table is made up of a board which sits on top of a frame and six bulbous legs which are linked by stretchers. The board is not fused with the base which was common of this period as it meant the board could be turned over for more functions and was more manoeuvrable.

A board is a type of table, and this saying comes from the games of cards that were played at these old tables. Cheats would drop their hands under the board to change their cards. So if you play with your hands above board you were honest and above suspicion. 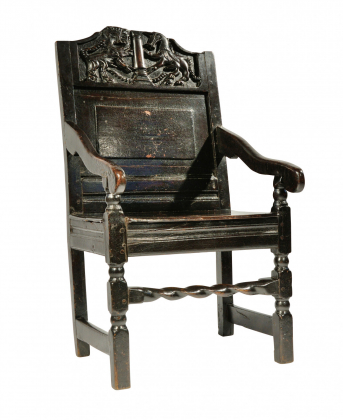 This armchair depicting a lion and a unicorn, the royal coat of arms of James I of England and James VI of Scotland, was bought by Laurence Cadbury from the Harrods Department Store in 1910. It dates from between 1680-1770 and has been subject to numerous repairs and changes throughout its life. Laurence, referring to this, wrote it ‘appears to be a more or less made up chair’. 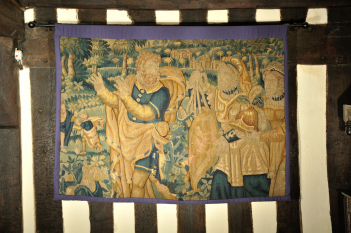 Purchased by Laurence Cadbury in 1936, this tapestry looks very different to how it would have originally. The colours have faded from its original splendour and the borders and right side have been removed. It was part of a larger tapestry, a piece of which is now at Packwood House in Warwickshire.

Greek mythology was a very popular subject for tapestries during the 15-17th centuries. It is thought that the tapestry at Selly Manor depicts part of the story of Achilles, told in Homer’s Illiad. The story follows Achilles, who refused to fight at the beginning of the Trojan Wars. Later his mother presented him with a new set of armour, made by the Gods, and he agreed to enter the battle. The tapestry scene may depict both of these elements of the story and it is likely to have formed one part of a sequence of tapestries that when viewed together would tell the whole story.

We hope you have enjoyed virtually exploring the hall and we hope it will not be too long until we can welcome you back to Selly Manor in person. Join us for the next instalment where we will explore the kitchen.