Having considered the work of Sutherland and Alsop in our previous posts, it is time to move into the twentieth century and examine how watercolour was used to capture Selly Manor during its period of decline.

The third item we have chosen in this sequence of depictions is Evacustes A. Phipson’s ‘Manor House, Bournbrook’. Produced in 1908, this piece captures an incredibly significant moment in the timeline of the manor. Painted just one year after George Cadbury’s purchase of the building and before its dismantlement, Phipson’s depiction is one of the last examples of work showing the manor in its original location. 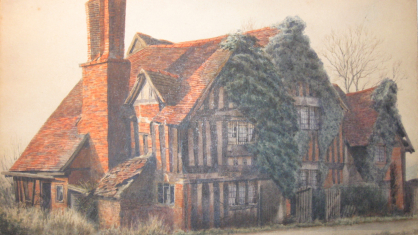 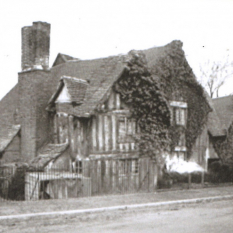 By the start of the twentieth century, Selly Manor was almost uninhabitable. Aside from the presence of a possible caretaker, there is a consensus that the building was no longer an effective domestic dwelling. A photograph of the building in 1904 reveals that the roof was in desperate need of repair and that the exterior walls were beginning to crumble as a result of ivy growth. These features are reflected again in Phipson’s 1908 painting, suggesting that the manor was allowed to fall into even further decline over the next four years. The deterioration of the manor in its original location coincided with the urbanisation of the surrounding area. As mentioned in previous posts, Selly Oak remained rural until relatively late within the Birmingham context. In the early twentieth century, however, the area was transformed into the expanse of urban housing we see today. This construction ran parallel to the development of the nearby University of Birmingham, which was established in 1900. The manor was increasingly neglected during this period of urbanisation and its surroundings described as ‘unlovely’.

This sense decline is very apparent in Phipson’s painting. Although some surrounding greenery is depicted, the only visible tree appears to be bare. The house itself is engulfed by ivy and seems unstable on its foundations. Roof tiles are visibly missing and windows appear damaged. Each of these details point to the long-term neglect of the building. Despite this sense of deterioration, Phipson’s painting is relatively idealised. The use of a warm palette suggests, for example, that the sun is setting on the house. This was, perhaps, Phipson’s method of hinting the beginning of a new chapter in the story of the building.

Idealism was a typical feature in Phipson’s work. Born in Kings Heath in 1854, Phipson was a prolific painter throughout his life. He established connections with the designer William Morris and spent a lot of time in the Hammersmith area, where much of his work is currently stored. Although he painted with almost photographic accuracy, Phipson frequently omitted elements that he deemed disagreeable with the aesthetic of his work. In ‘Manor House, Bournbrook’, for example, there are very few indications that the surrounding area was experiencing rapid urban development.

Also keen to look beyond the surrounding urbanisation of the manor was George Cadbury. Aware of the potential of the building as an educational tool, Cadbury was concerned about its deterioration in the Selly Oak area. He subsequently purchased the manor in 1907 with the view of moving it to Bournville and opening it as a museum.

At the time of Phipson’s painting, therefore, the future of the manor as we know it was being mapped. As Phipson sought to remove surrounding urbanisation in paint, George Cadbury was in the process removing the building in reality. This renders  ‘Manor House, Bournbrook’ a valuable addition to the collection and a fascinating snapshot of the building’s development.