At first sight, the image above is a classic late Edwardian family portrait. Perhaps what makes it a bit extra special is that the man seated is George Cadbury - the famous chocolate manufacturer, philanthropist and founder of Bournville. For the time it is a relatively informal picture with blurred lines and not all the subjects paying attention. We think the photograph was taken soon after about 1910 and probably on a terrace outside the Cadbury family home, the Manor House in Northfield. Stood at the back of the image are Mollie, Laurence and Dolly Cadbury - all children of Dame Elizabeth and George who are seated. The young girls either side of the photo are not yet identified.

Those with an eagle eye will note that George is sitting on a rather impressive chair. It is very wide with big turned legs but plain and not grand at all. That chair now resides in the collection at Selly Manor - you can see a much better view of it below. We have hundreds of photographs and archives in our collection but none of George Cadbury at Selly Manor and this is the first one we have ever discovered showing him with an object now at the museum - so we were very excited to discover it!

The chair itself is made of oak and is much lower than you might expect from a late 17th century chair. It was bought by Laurence Cadbury from an antiques dealer in Carlisle, and it is thought to have been made in nearby Westmorland between about 1675 and 1725. Interestingly the chair is branded 'IC' on the back which was a mark made by the original owner to show it belonged to them - perhaps during an inventory of their possessions. We were also fortunate to be able to conserve the chair back in 2013 to ensure the upholstered seat would last for generations to come. 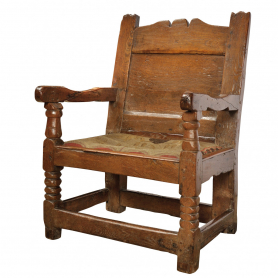